The Foundation has identified the introduction of Jazz Education, as an essential factor in transforming and enriching South Africa’s education system and formal curriculum (from schools, colleges and universities) to promote cultural enquiry, creative thinking and technical prowess that is transferable to greater socio-economic development of South Africa and the Continent’s creative propensity. The aim being to position South Africa to play a leading role in the realisation of the African Union’s Agenda 2063 under the auspices of the AU Social and Cultural Council. Borrowing from our 100 years old research of Jazz Heritage, the unique approach of the SPIN Foundation to Jazz practice in South Africa includes all the art forms as part of the Jazz expression beyond music: Jazz Poetry, Jazz Dance, Jazz Literature and Jazz Visual Arts, as underpinned by improvisation and creative solutions. This positions South Africa’s Jazz tradition into a deeper medium and genre of expression that is truly inclusive and diverse to provide a suitable leap into stimulating Africa’s Creative Industries, starting with Southern African Development Community, in partnership with UNESCO SADC Commission.

Jazz music is the greatest musical symbol of democracy as a language of cultural diversity, social dialogue and diplomacy. It demands the ability to collaborate and also rewards great individuality, just like democracy itself. So it is fitting as South Africa matures its stable democracy and consolidates its role in the transformation of the Continent, that it convenes to celebrate Africa’s contribution to the glory of Jazz music in the world. South Africa launched its formal participation in the UNESCO Endorsed International Jazz Day, along side France’s hosting in 2015 April. This is the year that the dreaded xenophobic attacks on other African migrants and refugees erupted, compelling the South African government, particularly the Department of Arts and Culture to intervene through anti-xenophobia campaigns. As a signatory to various UNESCO conventions and a new democracy that is actively involved in the promotion of cultural diversity, diplomacy and peace in Africa, the experience of the South African International Jazz Day project has revealed the potential for Jazz to galvanise South Africa’s creative arts to play a pivotal role in highlighting Regional and Inter-Regional cultural connections in Africa’s living heritage. The less obvious but strongly lived is the living heritage of Africa’s Fifth Region (the diaspora), as led by Cuba, whose Africa influenced music, dance, fashion and Pan-African ideology has helped to shape contemporary identity and kernels of South-to-South affinity. Through dialogue and retrospection, Jazz was reaffirmed to be a valuable cultural asset with high potential in the promotion of diversity, cooperation and a common humanity among communities and nations of the world. .

The growth of the African economy has today been limited to historical exploits of natural resources human and cultural development. The relapse of new governments, relative collapse of colonial education systems and the stagnation in infrastructural progress in post colonial Africa reflects the prioritisation of human advancement as the least priority and yet it is central to peace. South Africa as signatory to various UN conventions for education, science, health, culture, environment etc. and the stimulation of regional cooperation among African states around the same, requires a new system of positive disruption. Given Africa’s rapid urbanization and migration challenges that affect South Africa, and as the Region grows its investment brand as a business and cultural destination, the social and economic reconstruction of South Africa in the next twenty years would require the leveraging of the diversity of indigenous heritage in the SADC Region and the further opening of cross boarder trade that can stimulate inter-country creative arts collaborations. The discipline of Jazz has been international proven to can inspire and provoke artists to become the essential voice of aspiration, renewed purpose and drivers of social innovation. Through the South African International Jazz Day’s sub-theme of Roots and Routes, South Africa is poised to ‘re-trace’ and foster the cultural and Jazz heritage connections with the rest of Africa to raise consciousness and highlight common origins and similarity of modern influences. This, as we celebrate the common Roots that underscores Africa’s common humanity with the US, Cuba, Brazil, India, China and the greater world in sharing creative products, creative services and the manufacturing of instruments and practice enhancing technology (electronic hardware and software solutions).

In a world that tends to associate Africa with pessimism and strife, the proposed the project aims to inspire continental goodwill and cultural synergy that has far reaching implications for promoting the activation of creative industries in all forms of the UNCTAD industrial codes and economic indicators of Design, Visual Arts, New Media, Audio Visuals, Art Crafts, Performing Arts and Publishing. 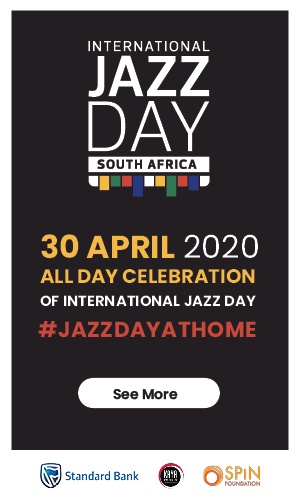